Sr. Barbara is a Dominican Sister of Grand Rapids, Michigan, and has served on the CTU faculty since 1988. She has served as Vice President and Academic Dean and has been actively involved in the Association of Theological Schools, including service on their Board of Directors. She has led many of CTU’s Israel Retreats and Biblical Lands Study and Travel Programs in Greece, Turkey, Israel and the Palestinian Territories, Jordan, and Egypt. A former Spanish teacher, she has given presentations in México, Bolivia, Perú, Uruguay, Brasil, Guatemala, and Santo Domingo. She has also lectured in Ireland, New Zealand, Australia, Canada, the Philippines, Thailand, and Rome.

Sr. Barbara is one of the leading scholars in feminist interpretation of the Scriptures. She is General Editor for the Wisdom Commentary Series, a new 58-volume feminist commentary on the Bible published by Liturgical Press (see www.wisdomcommentary.org, where her Introduction to the series can be downloaded gratis).

She is past President of the Catholic Biblical Association (2014-2015). She was inducted into Aquinas College Hall of Fame in 2016 and has received the Yves Congar Award for Theological Excellence from Barry University (2017), St. Martin DePorres Award from the Southern Province Dominican Friars (2016), Jerome Award from Catholic Library Association (2012), Theological Award for Distinguished Women Theologians from the College of Mount St. Joseph (2010), the Sophia Award from Washington Theological Union (2000).

On December 10 of 2019, Sister Barbara Reid, OP, Professor of New Testament Studies at Catholic Theological Union, was awarded the title of Doctor Honoris Causa by the University of Graz in Austria.  Sr. Barbara was honored particularly for her work in Feminist biblical studies, especially the creation of the acclaimed Wisdom Commentary series published by Liturgical Press. 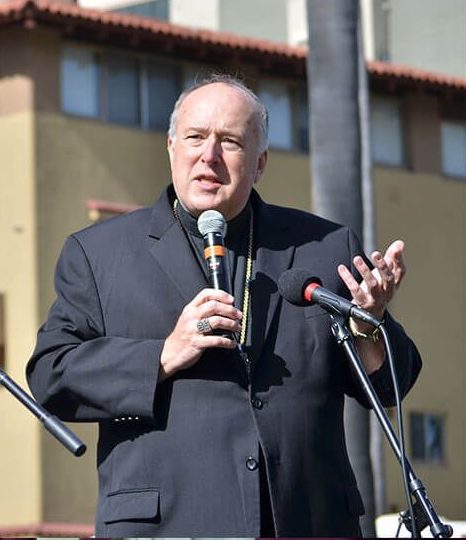 Robert Walter McElroy (born February 5, 1954) is a Roman Catholic prelate and bishop. From 2010 through 2015 he was auxiliary bishop of the Archdiocese of San Francisco, California. In 2015, he became the sixth Bishop of the San Diego Diocese.

McElroy was born into a Catholic family in San Francisco, California on February 5, 1954. One of five children, he was born to Walter and Roberta McElroy. He grew up in San Mateo county. He earned an A.B. in history from Harvard University in 1975 and a Master’s degree in American history from Stanford University in 1976. In 1979, McElroy attended St. Patrick’s Seminary in Menlo Park, California, where he earned a master of divinity degree. In 1985, McElroy obtained a Licentiate of Sacred Theology (STL) degree from the Jesuit School of Theology in the Graduate Theological Union in Berkeley, California, with a thesis entitled, Freedom for Faith: John Courtney Murray and the Constitutional Question, 1942-1954.

In 1986, he obtained a doctorate in moral theology from the Pontifical Gregorian University in Rome, Italy with a dissertation entitled, John Courtney Murray and the Secular Crisis: Foundations for an American Catholic Public Theology, along with a PhD in political science from Stanford University in 1989 with a dissertation entitled, Morality and American Foreign Policy : The Role of Moral Norms in International Affairs.

From 1989 to 1995, he was parochial vicar at Saint Pius Church in Redwood City, California. In 1995, Archbishop Quinn appointed McElroy to be Vicar General of the Archdiocese of San Francisco, an office he held under Archbishop Quinn and Cardinal William Levada until 1997. He then became parochial vicar at St. Cecilia Church in San Francisco. In 1996, McElroy was made a prelate of honor by Pope John Paul II. From 1997 to 2010, McElroy was appointed to be pastor of St. Gregory Church in San Mateo, California by Cardinal William Levada.

As a priest, McElroy authored The Search for an American Public Theology: The Contribution of John Courtney Murray (Paulist Press, 1989) and Morality and American Foreign Policy: The Role of Ethics in International Affairs (Princeton University Press, 1992). He has written four articles for America magazine, a Jesuit magazine.

In 2005, he published an essay on the denial of the Eucharist to public officials because of their political positions. He criticized those who adopt what he called the “sanctions position” for a lack of “pastoral solicitude”, noted the expansion of grounds for sanctions from abortion to euthanasia and other issues by one diocese or another, questioned the lack of clarity as to what behavior triggers sanctions, and cited the occasions when Pope John Paul II distributed communion to political leaders who favored legalized abortion. He proposed that the church’s traditional “theology of scandal” should be invoked rather than employing Eucharistic practice as a means of discipline. He warned that imposing sanctions on individuals harms the church by appearing coercive, strengthens the argument of abortion advocates that the church is attempting to impose its religious beliefs on society at large, downplays the breadth of the church’s social agenda, and tends to “cast the church as a partisan actor in the American political system.”

He taught ethics at St. Patrick’s Seminary and was guest professor of social ethics at the University of San Francisco in the Fall of 2008.

On July 6, 2010, McElroy was appointed an auxiliary bishop for San Francisco and titular Bishop of Gemellae in Byzacena by Pope Benedict XVI. On September 7, 2010, McElroy received his episcopal consecration from Archbishop George Hugh Niederauer of San Francisco, with Archbishop Emeritus John Raphael Quinn of San Francisco and Bishop John Charles Wester of Salt Lake City serving as co-consecrators. As auxiliary bishop, McElroy was the Archdiocesan Vicar for Parish Life and Development.

Writing in America, he argued that the emphasis of Pope Francis on inequality in Catholic social teaching

did not go over well with many American Catholics, who criticized his statement for being radical, simplistic, and confusing. This rebuff stands in stark and telling contrast to the otherwise enthusiastic reception the new pope has met with in the United States. From the moment of his election, Pope Francis has captured the attention of the American people with his message and manner, even as he has challenged us all to deep renewal and reform in our lives. Americans take heart in the pope’s call to build an ecclesiastical culture that casts off judgmentalism; they applaud structural reforms at the Vatican; and they admire Francis’s continuing focus on the pastoral needs of ordinary men and women.

On March 3, 2015, McElroy was appointed the sixth Bishop of San Diego by Pope Francis, succeeding the late Bishop Cirilo Flores. The diocese serves about one million Catholics in San Diego and Imperial counties. His installation took place on April 15, 2015, at St. Therese of Carmel Catholic Church.

McElroy is widely regarded as a supporter of the progressive policies of Pope Francis. He has written frequently and extensively on social inequelity and the Church’s social justice mission. In his first public appearance in San Diego, he pledged to champion the cause of the homeless; to support comprehensive immigration reform; and to ban anyone who has abused minors from serving in the clergy or other employment in the diocese.

In 2017 he preached at the funeral of Archbishop John R. Quinn of San Francisco.

Daniel P. Horan, OFM is a Franciscan friar of Holy Name Province (NY), assistant professor of systematic theology and spirituality at Catholic Theological Union in Chicago, columnist for National Catholic Reporter, and the author of twelve books including the award-winning The Franciscan Heart of Thomas Merton: A New Look at the Spiritual Influence on his Life, Thought, and Writing (2014). His latest books are titled, Reading, Praying, Living Pope Francis’s Rejoice and Be Glad (Forthcoming in 2019) and All God’s Creatures: A Theology of Creation (2018). He is the author of numerous popular and scholarly articles; is a frequent lecturer and retreat director around the United States and abroad; and has previously taught at Siena College, St. Bonaventure University, and in the School of Theology and Ministry of Boston College. Fr. Daniel currently serves on the Board of Trustees of St. Bonaventure University in New York and the Board of Regents of the Franciscan School of Theology in California. He is also the co-host of The Francis Effect Podcast. Fr. Daniel previously served on the Board of Directors of the International Thomas Merton Society, was the Catholic Chaplain at Babson College in Wellesley, Mass., as co-editor of the academic journal New Theology Review, and was a columnist for America magazine. He received his PhD in theology from Boston College, MDiv and MA from the Washington Theological Union (DC), and a BA from St. Bonaventure University. In addition to several other recognitions, he was awarded an honorary doctorate by Felician University (New Jersey) in 2015.